This document is divided in two sections:

The starting point is a Merkle Proof, which efficiently proves that a voter's zkCensusKey belongs to a Merkle Tree (census). However, using this proof alone would allow the organizer of a process to correlate each vote envelope with its voter's the zkCensusKey on the database, so votes wouldn't be secret.

To this end, Vocdoni achieves voting anonymity by the use of ZK-Snarks.

Snark stands for Succinct non-interactive argument of knowledge. In our case, this means proving to someone that we know something, but without revealing the contents of what we know.

Although the computation is CPU and memory intensive, ZK Proofs can be generated from the user client running on modest hardware. The proof is validated by the Vochain Nodes, Miners, and any Third Party monitoring the process.

Voters use the proving key generated for the circuit below to generate a ZK Proof. The circuit receives both private and public inputs.

Data that could reveal the identity of the voter are kept private (gray boxes in the diagram). Public inputs are submitted within the Vote Envelope, so that validators can check them against the proof and make sure that the user hasn't voted twice. 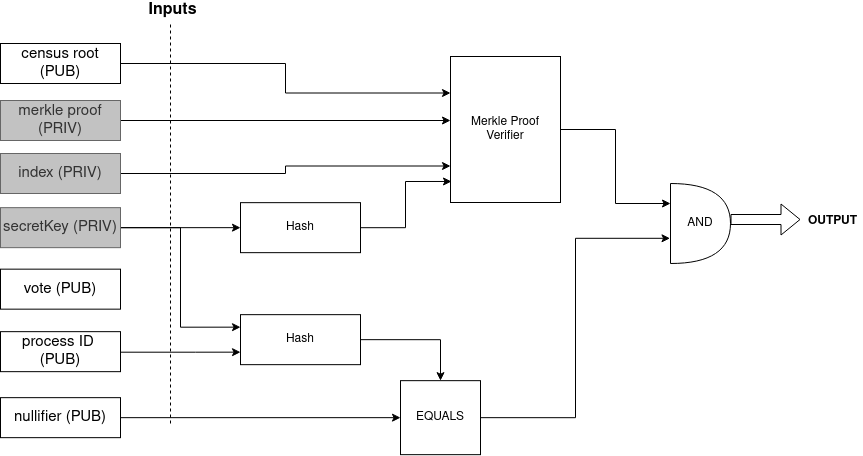 The circuit above verifies that:

The franchise proof is generated by running the zkSNARK circuit.

The organization could also directly register Users' secret keys to the Vochain, avoiding the need for a registration phase. This option would use the ProcessMode flags

In the Vochain, we're using the arbo (opens new window) MerkleTree, which is a Go implementation compatible with the Circom spec.

The MerkleTree uses the Poseidon hash, which is a 'snark-friendly' hash function that later on can be proved inside a circuit without requiring too many constraints.

The following diagram contains a visual representation of the data structure of the Leaves of the MerkleTree being used in the scheme of the zk-census-proof. 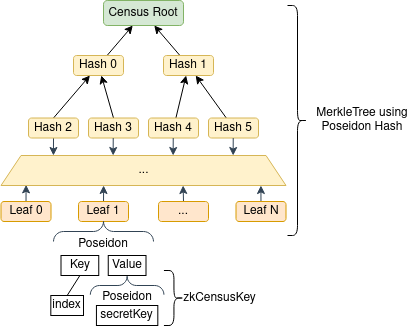 The index value is determined by the CensusTree builder, which has an index value for each CensusTree. This value increments with the addition of each new leaf.

The Leaves are structured in this way in order to use the MerkleTrees more efficiently, allowing more user keys to fit inside a smaller tree and therefore reducing the zk circuit size. This is because the value of any given leaf's key determines that leaf's position on the tree. If the leaf key were determined by the zkCensusKey, rather than an incremental index, each new leaf would have a significant chance of collision before filling all the available leaf spots for a given height. Trees would therefore be less balanced and require larger circuits for the same census size due to inefficient use of tree space. With the incremental index approach, on the other hand, all the leaf spots can be filled without a single collision. This produces much smaller circuits for the same number of users.

Origin of each zkInput parameter:

There will be different circuits of the zk-census-proof depending on the census size, also there could be more use cases with different circuit designs. Both the client and the Vochain need a way to univocally identify those circuits, in order to user the proper Proving key, Witness calculator and Verification key for each circuit.

Circuits are identified across the stack by using a Protobuf enum type. Each ProofZkSNARK protobuf package will have a Type identifier indicating which circuit the proof belongs to, so the Vochain knows which Verification Key to use for verifying the proof.

Below there are listed some common combinations of flags used when created a new process:

A set of commitment keys are generated for each election process by a set of trusted identities named keykeepers. Only if all keykeepers are malicious could they tamper with the process, so it is crucial to distribute these special identities well. Once all these keys are revealed, anyone can generate a valid proof. This mechanism is added to the circuit in order to avoid vote buying when the process is over. Since anyone can now generate a valid proof, a voter will no longer be able to prove that they are the owner of a specific vote nullifier. 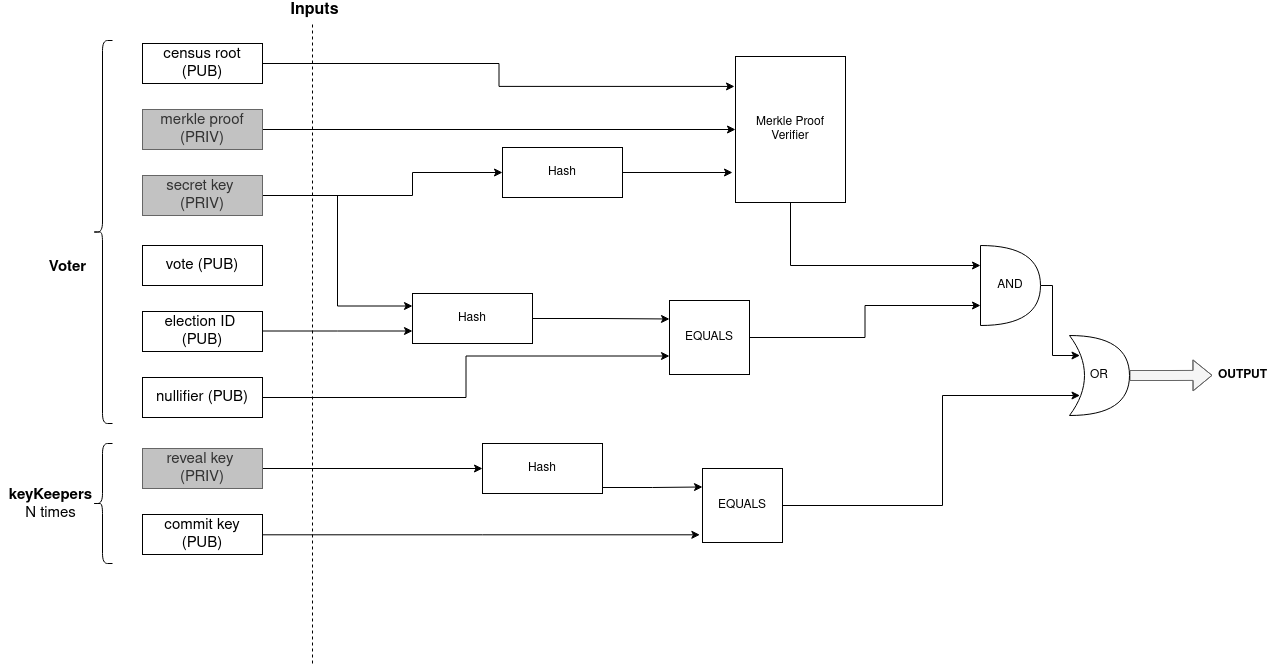 zkInputs of this alternative scheme: