Vochain is a Proof-of-Authority blockchain network that uses Tendermint (opens new window) as its consensus algorithm. The main purpose of Vochain is to register polls, votes, and backing processes in a decentralized and verifiable way.

You can think of Vochain as a specific purpose blockchain for voting. Vochain needs no cryptocurrency, gas or smart contract interactions; it just has the core logic represented as a state machine that any participation process needs to follow.

Many Vochains could exist, some might be ephemeral and others might be permanent. It is important to mention that the details of each Vochain are indexed on the Ethereum blockchain.

Vocdoni uses Ethereum as the source of truth. This has several advantages, like having a versioning system for each blockchain and being able to prune legacy processes and leaving only a hash representing all the history. We can also use interchain communication in order to pass messages between blockchains and trigger certain actions. 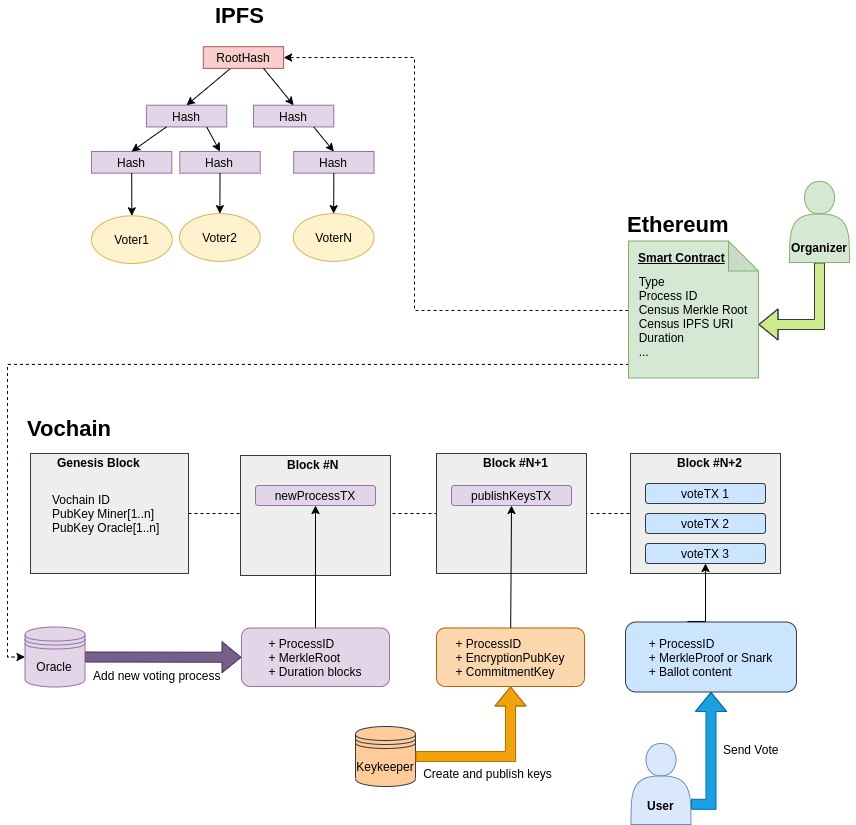 For the current version, only one Vochain exists, which handles all processes.

The nicest thing about Tendermint is that its core (opens new window) handles the network and consensus layers, so you only need to implement the logic of the application. This is, the state machine itself.

What does the state machine have to accomplish?

Imagine a regular voting process. You first need to identify yourself to know if you have the right to participate. Then you visit your physical/digital polling station to cast your vote. Once done, at some point the process finishes and the votes are counted one by one.

Vochain does exactly the same, plus storing the processes.

The workflow from creating a process, voting, and finalizing the process, is:

Vochain also has some special transactions for oracles, which allow them to:

A minimum of N/M oracle transactions are required in order to execute some functions (such as the ones below).

The following are data payloads that are packaged by a client app or an oracle, to be eventually persisted.

The data stored in Ethereum lives in a smart contract 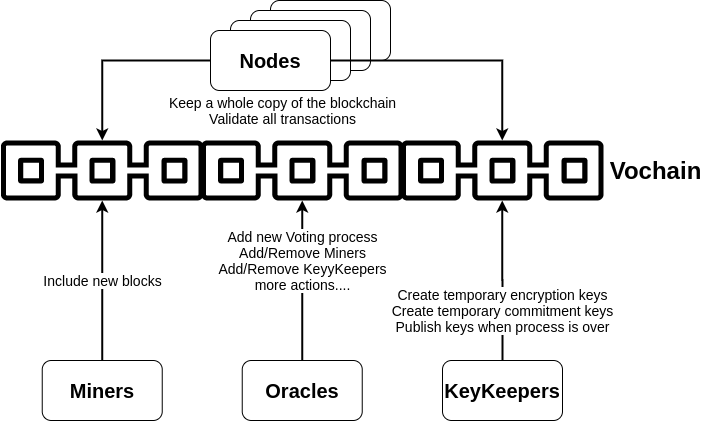 As any other blockchain, Vochain requires a set of nodes able to include new transactions on the chain that will modify the state. However all nodes of the network (miners or not) will execute the same transactions in the same way the miner does, so if there is something that does not follow the rules implemented on the Vochain logic, a new state will be computed and the chain will diverge (fork).

Currently as Vochain is proof-of-authority, only a set of nodes will be able to propose and include new blocks on the blockchain. These nodes (identified by a public key) are listed in the genesis file (the initial set) and later the list can be modified by executing the required transactions for doing so.

In the future, miners would get reward for validating new blocks and they would also be required to keep an economic stake on Ethereum in order to demonstrate its commitment for good behavior.

The Oracle is a trusted identity that enables bidirectional communication between Vochain-like blockchains and specific-process smart contracts living in Ethereum. Specifically, the oracle is a full node within both ethereum and tendermint, and also acts as a decentralized storage machine which enables Vochain and Ethereum events reading. The events are:

The KeyKeeper is a trusted identity that act as temporary cryptographic key administrators. If an election is private or anonymous, keykeepers initially publish an addProcessKey transaction with a set of newly generated keys. At the end of the voting process, these keys will be revealed through a revealProcessKey transaction. As long as at least one keykeeper maintains integrity, no keykeepers will be able to act against the system’s specifications, maliciously or otherwise.

The scrutinizer is the component that tallies and decode/decrypt (if needed) each vote stored in the voting blockchain for each process of each entity.